Starting a new project, you have to choose the correct javascript framework. One of the most popular frameworks nowadays are React.js and Vue.js.

Both React and Vue.js have certain strengths and weaknesses and you can generally use either of the libraries for any project. So we decided to compare these two technologies to have a look at their key points and compare their differences so you can decide which technology to choose.

Already a well known Javascript library developed by Facebook in 2013. It allows developers to create large web-applications that can change the data over time with no need to reload the page itself.

Vue.js is a popular open-source framework for building complex UIs and SPAs (Single-page Applications). It was created by Evan You one year later than React, in 2014. VueJS works mostly with the presentation layer. It can easily be integrated into large projects for frontend development. 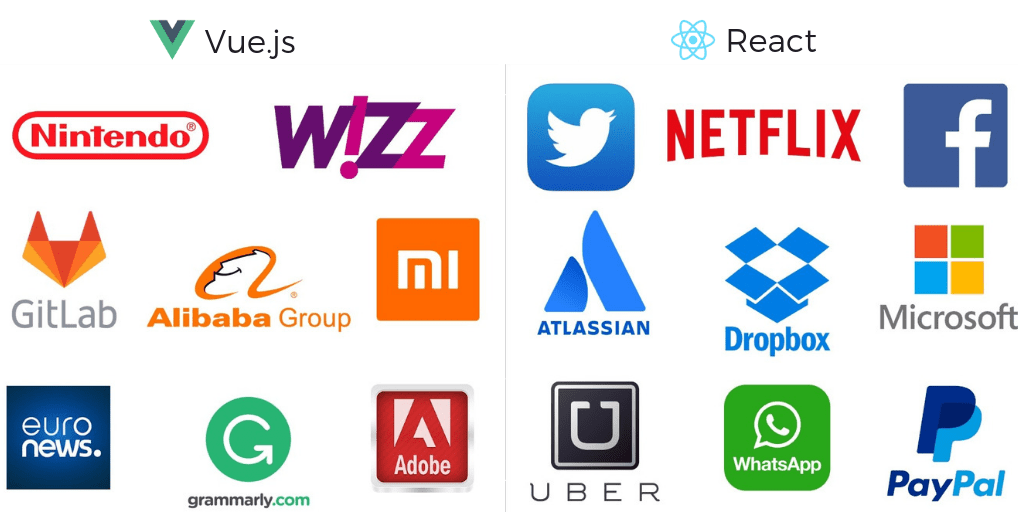 React is built around the idea of composable components. They are isolated and, in most cases, only expose the props interface. It makes team collaboration a lot easier as different people can create various components that work well together. Making changes to components is also a breeze, and that would rarely cause the chain of changes through the whole codebase.

Vue.js supports two-way data binding, but one-way parent-child data flow between components is the default. Vue components are supported in every browser, have cross-component data flow, custom events communication, and other essential features.

Vue took many good ideas from React, most importantly the Virtual DOM. But Vue implements it with some sort of automatic dependency management. This tracks which components are affected by a change of the state so that only those components are re-rendered when that state property changes.

In React, on the other hand, when a part of the state that affects a component changes, the component will be re-rendered. By default all its children will be re-rendered as well. To avoid this you need to use the shouldComponentUpdate method of each component and determine if that component should be re-rendered. This gives Vue a bit of an advantage in terms of ease of use, and out of the box performance gains.

Both React and Vue are exceptionally and similarly fast, so speed is unlikely to be a deciding factor in choosing between them. Even the size is very comparable. React currently takes about 100 kb while Vue around 80 kb. This potentially makes Vue somewhat faster, however the difference is not so huge.

Speaking about React, all components express their UI within render functions using JSX (JavaScript Expressions), a declarative XML-like syntax that works within JavaScript.

Render functions with JSX have a few advantages:

In Vue, there are also render functions plus it supports JSX . As the default experience Vue offers templates as a simpler alternative. Any valid HTML is also a valid Vue template, and this leads to a few advantages of its own:

Vue JS keeps itself highly readable as it is essentially composed of just JavaScript and HTML elements, making it a very ‘pure’ option for websites and apps.

React’s JSX combine HTML and CSS together into JavaScript. Although there is support for extracting CSS into a single stylesheet at build time, it is still common that a runtime will need to be included in the bundle for styling to work properly. While you gain access to the dynamism of JavaScript while constructing your styles, the tradeoff is often increased bundle size and runtime cost.

If you are interested in CSS-in-JS, a lot of the popular CSS-in-JS libraries support Vue (e.g. styled-components-vue and vue-emotion). The core difference between React and Vue here lies in the default method of styling in Vue is through more familiar style tags in single-file components.

React has dedicated support from Facebook, there are no doubts about the growth of this framework. React has frequently published updates. It releases a major update every six months. But on the other side, due to the constant updates React technologies are accelerating so fast that there is no time to write proper instructions. Developers must also regularly get up to date with the new ways to do things. As of May 2020, there are 1326 developers contributing to the official React repository on GitHub.

There are plenty of UI components for React developed by the huge React community. The most popular library called Material-UI Library & Dependencies could be also downloaded freely. In version 16.8.0, React has introduced Hooks. It reduces the learning curve for frontend beginners. Moreover, hooks enable developers to adhere to functional programming instead of object-oriented programming. In addition, Facebook has a lot of mentorship programs, tutorials and supportive events.

The Vue community still keeps growing. There are 293 active contributors to the official Vue repository on GitHub as of May 2020. But keep in mind that Vue.js has the lowest learning curve among all frontend frameworks. This makes it appealing for both beginners and longtime professionals.

What concerns vacancies, React currently has more job listings than Vue. According to LinkedIn, 14 042 jobs looking for React.js in European Union, and 6 450 vacancies looking for Vue.js.

React’s strong community means users have access to quick help from experienced developers. On Github React has gathered over 122 thousand stars, and usage statistics on npm show that the framework is downloaded more than 5 million times a week.  With about 800.000 weekly downloads, Vue.js is having great results as well. Over 128 thousand Github stars show its rising popularity. 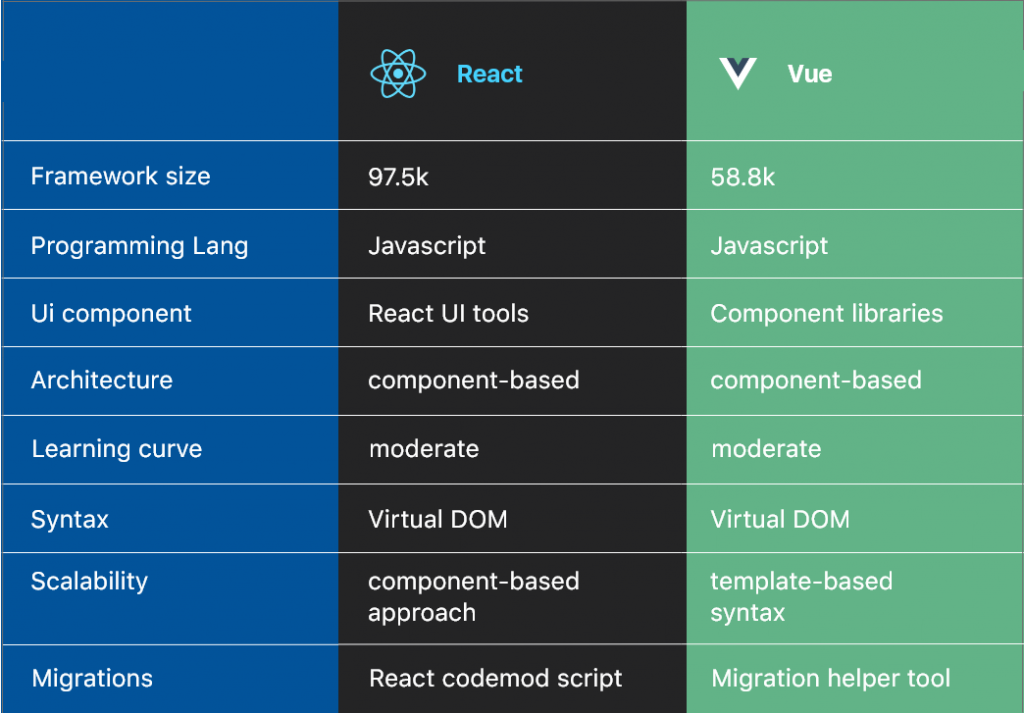 Choose React when you are looking to build complex apps with the potential to expand the same in the future with bringing more developers on board. React might be the go-to choice when the performance and scalability are critical and you have tight deadlines. React offers flexibility, a hot job market.

However, Vue.js is the best bet when developing a simple and lightweight app.  Choose Vue.js when you need high performance. Vue is more structured, easier to figure out and set up, resulting in reduced project duration and overtime.

And what pros and cons of using React.js and Vue.js have you come across? Which one would you choose for you?