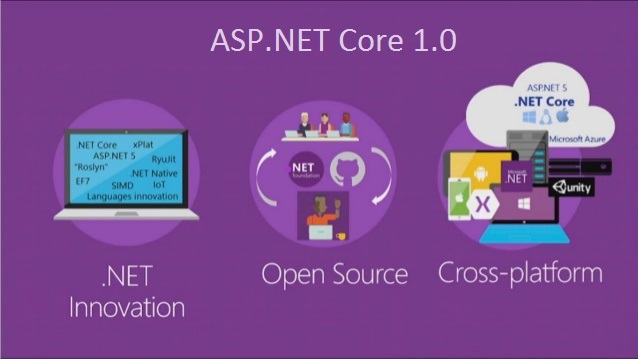 ASP.NET Core is a new open-source and cross-platform framework for building modern cloud based internet connected applications, such as web apps, IoT apps and mobile backends. ASP.NET Core apps can run on .NET Core or on the full .NET Framework. It was architected to provide an optimized development framework for apps that are deployed to the cloud or run on-premises. It consists of modular components with minimal overhead, so you retain flexibility while constructing your solutions. You can develop and run your ASP.NET Core apps cross-platform on Windows, Mac and Linux. ASP.NET Core is open source at GitHub.

The framework is a complete rewrite that unites the previously separate ASP.NET MVC and Web API into a single programming model.

Despite being a new framework, built on a new web stack, it does have a high degree of concept compatibility with ASP.NET MVC.

ASP.NET Platform exists for more than 15 years. In addition, at the time of System.Web creation it contained a large amount of code to support backward compatibility with classic ASP. During this time, the platform has accumulated a sufficient amount of code that is simply no longer needed and is deprecated. Microsoft faced a difficult choice: to abandon backward compatibility, or to announce a new platform. They chose the second option. At the same time, they would have to abandon the existing runtime. Microsoft has always been a company focused on creation and launch on Windows. ASP.NET was no exception. Now the situation has changed: Azure and Linux occupied an important place in the company’s strategy.

ASP.NET Core is not just a new version. It is a completely new platform, the change of epochs. Switching to ASP.NET Core can bring many benefits: compact code, better performance and scalability. But what price will be paid in return, how much code will have to be rewritten?

.NET Core contains many components, which we are used to deal with. Forget System.Web, Web Forms, Transaction Scope, WPF, Win Forms. They no longer exist. For simple ASP.NET MVC-applications changes will be minor and the migration will be simple. For more complex applications, which use a great number of .NET Framework classes and ASP.NET pipeline situation is more complicated. Something may work and something may not. Some part of the code will have to be rewritten from scratch. Additional problems may be caused by WebApi, because ASP.NET MVC subsystems and WebAPI are now combined. Many libraries and nuget-packages are not ready yet. So, some applications simply will not have a chance to migrate until new versions of the libraries appear.

ASP.NET Core is the work on the bugs of the classic ASP.NET MVC, the ability to start with a clean slate. In addition, Microsoft also aims to become as popular as Ruby and NodeJS among younger developers.
NodeJS and ASP.NET have always been rivals: both – a platform for backend. But in fact, between them, of course, there was no struggle. The new generation of developers, the so-called hipster developers, prefer Ruby and Node. The adult generation, people from the corporate environment, are on the side of .NET and Java. .NET Core is clearly trying to be more youthful, fashionable and popular. So, in future we can expect the .NET Core and NodeJS to be in opposition.

In its advertising campaign, Microsoft is betting on unusual positions for it: high performance, scalability, cross-platform. Do you think that ASP.NET “crawls” on the territory of NodeJS? Please feel free to share your thoughts with us.

Thank you in advance!